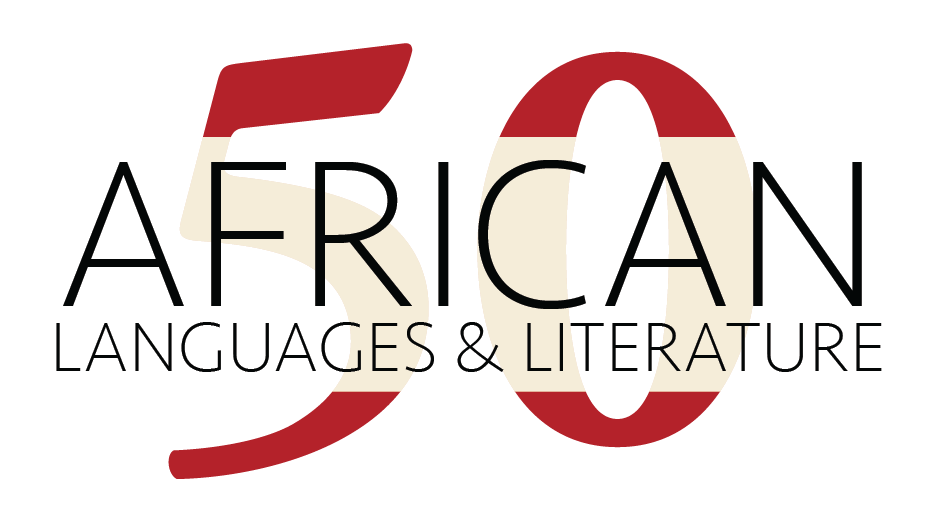 2014-15 marks the Department of African Languages and Literature’s 50th anniversary.

The year will include a number of exciting events:

Alumni research talks throughout the Fall

During the African Studies Program’s Fall Africa at Noon series, we will hear from a number of alumni. Confirmed speakers include:

A festschrift for Harold Scheub, 31 October

This one-day symposium in October will gather former students and colleagues of Harold Scheub to celebrate his life’s Work. Harold Scheub, a legend on campus and eminent scholar of African oral tradition, retired in January 2014 after 43 years of teaching at UW-Madison. Symposium participants will reflect on the future of scholarship and teaching of African oral tradition in the department and in academia at large. Tentatively entitled “Oral Tradition and Popular Culture,” the symposium will seek to explore contemporary articulations of oral tradition-the field in which Scheub spent more than 50 years excavating in more than 30 books-in light of current cultural and literary theories. As the locus of oral tradition has shifted to include urban spaces, what is its relationship with other cultural and esthetic expressions that rely on it? Are “oral tradition” and “popular culture” complementary or incompatible? What is their terrain of encounter? How do they interact? What are their forms of expression? How do their modes of production impinge on the question of modernity? In addition to honoring an esteemed colleague, We hope the symposium will help us maintain productive exchanges between oral tradition and cultural studies.

A graduate student-run conference in October

Students of African Languages and Literature (SALL) will host a symposium, “Mobility, Narratives, and Languages” in October. Their aim is to stir up discussion about African languages, literatures, and cultures and their significance over the past 50 years. Additionally, the conference will address various cultural and socio-political forces that helped shape the field, as well as current literary critiques. The conference aims to thematically discuss African languages, literature, and cultures via three strands. First, “Mobility” – the circum-Atlantic movements (immigration, emigration, slavery, trade, colonialism, displacement, war, etc. ). Secondly, “Narrative” including indigenous and foreign literary writings from and about the continent that have been canonized both locally and internationally; plastic, visual and media narratives addressing identity and body; and “Othering,” power dynamics and rules of law in postcolonial African, states. Linguistically, the conference is concerned with the role of “language” in social and political discourses as related, but not limited to, topics of nationalism, nationhood, collective social praxis, language policy, legitimacy and representation, new media forms, and African popular culture.

An alumni weekend symposium in April

We will hold a two-day symposium (April 10-11, 2015) that will feature additional selected alumni of the department. They will be asked to reflect on how they got where they are from here and to discuss the variety of careers that one can pursue with a degree in African Languages and Literature. This Alumni Weekend Symposium will also include a panel of emeriti faculty. Confirmed speakers include Jared Banks, Janet Beik, Lowell Brower, Karin Gleisner, Clifford Hill, Edris Makward, Phil Noss, Kim Rapp, Akua Sarr, and Peter Quella. Click here for more information and to RSVP.

Towards African Cultural Studies conference in May

On the first two days of May 2015, the Department of African Languages & Literature will hold a two-day international conference. For fifty years, the department has taught African languages, African literature, linguistics, and oral tradition. In its strategic plan dated July 2012 that aims to look to the future, the department committed itself to embracing cultural studies as a promising field for renewal and transformation of its academic endeavors both in research and teaching. Cultural studies will make it possible to blend the disciplines we teach in a way that will be more productive and more coherent. In turn, this new approach will allow for a more holistic view of African cultural productions and practices. Cultural studies makes it possible for scholars to study in a way that is self-reflexive and interdisciplinary a variety of cultural forms and expressions beyond and including literature, such as new media, popular culture, music, visual and performance arts. Moreover, cultural studies will make it possible to examine the relationship between cultural creativity on the African continent and global cultural movements and exchanges, and thus open new avenues of inquiry into economies and politics of African migrations, current as well as historical. We have therefore begun to realign faculty resources toward African cultural studies. The two-day conference will feature our recent faculty recruits—Samuel England, Katrina Daly Thompson, John Nimis, and Matthew Brown—who are all in some way working in this area of inquiry. They will be joined by other younger scholars from other universities as well as a small number of senior scholars from this country and abroad. This will be the centerpiece and culminating event for the year. Its purpose is to create a road map toward the institutionalization of cultural studies in the department. lt will also (re)introduce us as a department (rather than only the individuals who practice it now) to the UW community of departments and programs that already practice cultural studies, and thus foster greater intellectual collaborations and conversations. We intend to publish the proceedings.

If you would like a 50th Anniversary Events poster please download the PDF or email afrlang@mailplus.wisc.edu for a 11×17 print.

Check back here for more information as the dates get closer!