Wolof is used by over 5 million people in Senegal, the Gambia, and Mauritania. It is a language in the Senegambian sub-section of the Niger-Congo language family. Historically, Wolof was written using Arabic script, but the language is now written and taught using the Roman alphabet.

Wolof is key for communication in West Africa and serves as the lingua franca in Senegal. It also plays an important role for Senegalese culture around the world. World recognized Senegalese singer Youssou Ndour extensively uses Wolof in his music and famed filmmaker Ousmane Sembène also produces in the Wolof language. You may also be familiar with Akon, another famous Wolof speaker.

If you have prior experience with Wolof, please contact Toni Landis (tllandis@wisc.edu) for enrollment guidance. 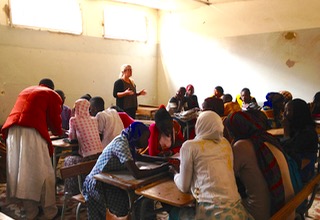 Check out Student Projects completed by our past Wolof students!

Featured Project: Welcome to my University