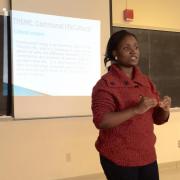 An understanding of Yoruba grants students access to a wide variety of Yoruba-speaking cultures across the globe. Yoruba is the native language of the Yoruba people, is an official language of Nigeria, and is widely spoken in Togo, Benin, and Sierra Leone. It is also a prominent language for communities in Brazil, Venezuela, Cuba, Trinidad, Tobago, Puerto Rico, and Haiti. Yoruba is a language of significant interest to linguists. The skills demonstrated by mastery of less commonly taught languages such as Yoruba are valuable to employers and graduate programs, and fluency in Yoruba itself is sought by government agencies and international non-governmental organizations.

Yoruba classes at UW-Madison are small. Our students are eligible for highly competitive undergraduate Foreign Language and Area Studies (FLAS) Fellowships that cover partial tuition and provide a stipend.

If you have prior experience with Yoruba, please contact Toni Landis (tllandis@wisc.edu) for enrollment guidance.

I studied Yoruba to a high degree of proficiency through UW Language classes and an intensive year-long study abroad program in Nigeria, made possible by grants and programs from the Language Flagship and the Boren Scholarship. Learning Yoruba to a native proficiency literally changed my life, worldview, and has greatly shaped my path for the future. Learning another language is like discovering another version of yourself, and it is a key that opens many doors, particularly if you know a less-commonly-taught language from a part of the world that is critical to politics, business, or security.
– Kevin B.

I use my language every day at work! My knowledge of Spanish allows me to develop closer relationships with students and families, [and] When I started at UW-Madison I was part of a First-year Interest Group (FIG) on African language and culture, and part of that was a Yoruba language class.
– Sarah S.

Check out Student Projects completed by our past Yoruba students!

Featured Project: The Will