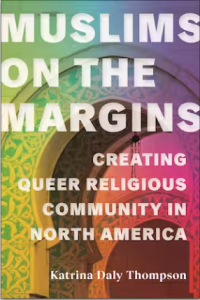 The turn of the twenty-first century ushered in a wave of progressive Muslims, whose modern interpretations and practices transformed the public’s perception of who could follow the teachings of Islam. Muslims on the Margins tells the story of their even more radical descendants: nonconformists who have reinterpreted their religion and created space for queer, trans, and nonbinary identities within Islam.

Katrina Daly Thompson draws extensively from conversations and interviews conducted both in person in North America and online in several international communities. Writing in a compelling narrative style that centers the real experiences and diverse perspectives of nonconformist Muslims, Thompson illustrates how these radical Muslims are forming a community dedicated to creative reinterpretations of their religion, critical questioning of established norms, expansive inclusion of those who are queer in various ways, and the creation of different religious futures. Muslims on the Margins is a powerful account of how Muslims are forging new traditions and setting precedents for a more inclusive community— one that is engaged with tradition, but not beholden to it.

Thompson speaks more about the research for the new book in a podcast, in which an online essay that Thompson wrote was also discussed. Though not to be released until April, Muslims on the Margins is now available to preorder here.