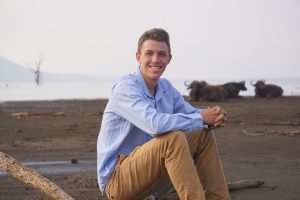 Max Bobholz, a junior majoring in African Cultural Studies and Biology, has been offered and accepted an invitation to join Phi Beta Kappa. This prestigious honor is afforded those students who “represent the highest caliber of academic achievement, intellectual breadth, and — reflecting the principles of its founders — a love of learning.”

Phi Beta Kappa is the oldest and most prestigious honors society in the United States, founded at William and Mary College in 1776 and boasting a roster of members that has included U.S. presidents, Supreme Court justices, and other public figures, as well as well-known artists, entertainers, athletes, journalists, and of course scholars and scientists.

The University of Wisconsin has had its own PBK chapter since 1899 and typically bestows this national honor on approximately 150 of its highest achieving undergraduates every year.