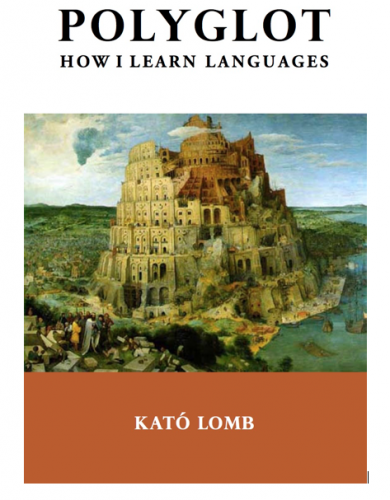 Polyglot: How I Learn Languages is an inspirational language learning book infused with a memoir by Kató Lomb, one of the most renowned autodidactic polyglots of the 20th century. In this book, Lomb, a fluent interpreter and/or translator of 17 different languages, divulges her passion and methodology for learning foreign languages. In Polyglot, Lomb emphasizes the importance of reading as a fundamental building block for language learning and the significance of personal motivation and overcoming inhibition in the language acquisition process. While explaining her mechanisms for language learning, Lomb simultaneously provides examples and insights from her own language-learning journey as a testament to this method. In examining her own studies, Lomb not only provides the reader with a straightforward methodology for autodidactic language learning but also the realization that successful independent learning of another language is achievable.

Lomb was not always inclined towards language learning and growing up she even considered herself a “foreign language flop” (23). Her lack of success in German class in high school caused her to study the natural sciences in college, where she earned a Ph.D. in chemistry. Despite her initial flagging in language studies as a child, Lomb’s interest in languages was stimulated in college when she discovered and began to translate a book of Latin proverbs (Krashen and Kiss 1996, 207). This newfound interest inspired her to enroll in a French class, where Lomb finished first in her class, exceeding even her teacher, who only knew enough French to stay one lesson ahead of her students. Upon graduating from college, Lomb decided to pursue her newfound passion and earn a living teaching foreign languages in her home country of Hungary. Lomb began teaching English in Budapest in the 1930s and never looked back. Throughout her life, Lomb taught herself 16 languages, including Latin, French, English, Russian, Romanian, Chinese, Polish, Japanese, Czech, Slovak, Ukrainian, Bulgarian, Italian, Spanish, German, and Hebrew, and earned a living teaching, translating, and/or interpreting them in various capacities.

Lomb outlines her methodology for successful language learning in one simple process: reading. Now known as the “core novel method,” Lomb’s approach to foreign language learning emphasizes reading in order to learn grammar, acquire vocabulary, and ultimately understand a language (Krashen and Kiss 1996, 208). In Polyglot, Lomb provides the reader insight into this methodology she developed and how it helped her to become the renowned polyglot that she was. At the outset of learning any language, Lomb began with a dictionary and used this as her initial textbook. From the dictionary, she studied words, what context they are used in, and the basic grammar structure. She emphasizes that she did not focus on memorization while reading the dictionary, but rather scanned and studied words as though they were a crossword puzzle to be solved (147). After perusing the dictionary, Lomb would then acquire an elementary grammar textbook in the target language (if one was available) and would systematically work through this book, completing the lessons and exercises in sequence (148). Finally, with this basic knowledge, Lomb would then begin to read literature in the target language. Initially, she read the book for recognition of words and structures she knew. Once she completed this, Lomb would then reread the text and work through what she did not know, writing down and looking up unknown words and grammatical structures as she encountered them. As this can be a tedious and time-consuming process, Lomb recommends reading for interest in this language acquisition method. She emphasizes that others have used this core novel method with great success because they read books that they were generally interested in (Krashen and Kiss 1996).

Although reading is at the core of her language learning methodology, Lomb also highlights the importance of listening to and speaking the language in the learning process. When comfortable with reading a language, Lomb began to listen to radio broadcasts and watch films in the target language in order to hear and practice pronunciation. She recommends practicing “auditive intuition,” or the perception, comparison, and reproduction of foreign sounds relative to your mother tongue, by listening to foreign media and imitating its pronunciation (90). Lomb also tried to find either a teacher or native speaker of the language in order to further develop her communication skills whenever possible. What makes Lomb’s language learning approach and experience truly autodidactic, however, is her assertion that speaking to another individual is not the only way in which to acquire spoken language proficiency. Although a conversation partner is ideal, Lomb discusses how she herself avoided failure in language learning by constructing silent monologues in the target language. According to Lomb, the benefits of silent monologues are twofold. First, monologues conducted silently prevent students from solidifying pronunciation errors in the absence of the correction of a teacher or native speaker. Secondly, they enable students to play with the language and develop a deeper understanding of its structure and expand their vocabulary without any inhibitions (77).

Although she sees reading as the mechanism with which to learn a foreign language, Lomb argues that the most important factors for successful language learning are motivation and overcoming inhibition. In Polyglot, Lomb provides a personally developed equation to explain the relationship between motivation, inhibition, and language acquisition (176):

According to Lomb, successful language learning is achieved by maintaining motivation throughout the learning process and by not becoming discouraged by mistakes made during practice. She states that inhibition undermines the entire language learning process when the fear of making mistakes prevents an individual from practicing speech or reading increasingly difficult texts in the target language. Lomb also argues that the comfortableness of the mother tongue in itself is inhibition for a foreign language student (52). In the “Forward” of the 1995 edition of Polyglot, Lomb argues that motivation and self-assurance, in conjunction with a good method, play a much more important role in successful foreign language acquisition than any level of innate language learning ability (xxi).

At the conclusion of explaining her language learning methodology, Lomb provides her “Ten Suggestions for Successful Language Learning.” These “commandments” outline what language students must and must not do if they desire to master a language within a reasonable timeframe (159). Lomb cautions that her methodology is not meant for everyone, nor is it meant to replace classroom language instruction entirely. Rather, Lomb argues that the goal of her book is to complement the more “common” language learning approaches and explain how she, over her lifetime, managed to teach herself to read, write, and speak in multiple languages.

The core novel language learning approach outlined by Lomb in Polyglot could be considered unconventional by many within the language learning community. The reliance on reading within her methodology makes Lomb’s approach a direct contrast to those language learning processes that emphasize “mouth and ear memory” over “eye memory,” such as the linguist-informant method and the Critical Languages Program (NASILP 2014). Lomb’s methodology is a direct juxtaposition to the linguist-information method, which emphasizes hours of conversation practice with a linguist and a native speaker of the target language in order to acquire proficiency (Nicholson 1944). Lomb places little emphasis on conversing with a native speaker in becoming proficient in a foreign language and her ability to capitalize on this idea was noted by Krashen and Kiss (1996) in an interview with the infamous polyglot. Krashen and Kiss (1996) provide testament to Lomb’s unconventional conversation methodologies, stating that “the most impressive aspect of Kato Lomb’s staggering accomplishment is the fact that nearly all her language acquisition was done with little or no contact with native speakers and with little reading material available” (208). The incorporation of a version of “tape work” for pronunciation practice in Lomb’s method make her slightly more aligned with the methodology of the Critical Languages Program, but not by much. The Critical Languages Program emphasizes hours of repetitive tape work in order to become proficient in a foreign language and places little emphasis on reading texts, understanding grammar, and acquiring an extensive vocabulary during the early phase of study, the things Lomb asserts are the key foundations to truly learning a foreign language.

Despite her unique methodology, Lomb’s assertions that the language learning process must be structured and that foreign language acquisition is achievable by adults are notions that resonate within the linguistic community. Marshall (1989) argues that you can independently master any language through a detailed systematic study and that the use of a “process” rather than “lessons” to learn a foreign language is essential in independent language study because it permits you to create language-learning mechanisms based on your own needs and the available resources (12). Lomb’s development of and repeated success with her systematic language study plan is a testament to this notion. She understood her personal intellectual strengths, was able to identify the limited resources available to her, and developed a proven language learning process that played to her strengths while simultaneously working within her limits. Dispelling the myth of the inability of adults to master a foreign language is another idea that Lomb personally takes to heart within her book. Lomb asserts that although the skills achieved and mechanisms for learning differ between children and adults, adults are just as able as children (if not more so) to learn a foreign language. If not already bilingual as a child by the age of 10, Lomb actually promotes waiting to learn languages until an older age. She asserts that language learning is more appreciated and, therefore, achievable with age as a person’s perspective is wider and language learning is usually a more personally motivated endeavor then (124). Not having successfully begun learning languages until college and successfully mastering Hebrew at 86, Lomb, herself, is a testament to this ideology (Krashen and Kiss 1996). Roberts and Kreuz (2015) emphatically endorse Lomb’s argument, asserting that adults are able to apply the skills and abilities they’ve honed over their lifetime to make language learning rewarding and achievable (1). They use cognitive science to further elaborate on what distinct experiential, emotional, and mental advantages adults have over children for acquiring a second language.