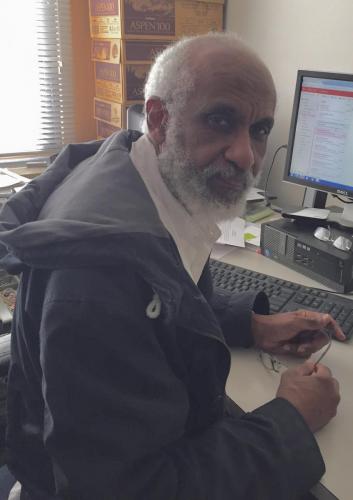 I am sitting in the African Cultural Studies’ mailroom, facing the doorway that looks out into the hall of the fourteenth floor. To my right is a woven craft from Burundi, its craftsmanship resembling that of an agaseke. Behind me is a bright orange board, detailing Professor Emeritus Harold Scheub’s publication history, and to my left is a Swahili certificate bestowed upon the University of Wisconsin- Madison. Although I rarely receive mail, I find that I like working in the mailroom, perhaps because I never know who or what I might find here. Today, for instance, Mustafa Mustafa walks in shortly after I arrive, who, quite incidentally, is the precise cause for my visit to the department today.

Although Mustafa knows of my interest in interviewing him, he admits that he not did expect me today. In point of fact, he has scheduled another meeting that is to begin very shortly. Before I am able to think about rescheduling for another day, however, he graciously permits me to begin, so long as I am quick.

“Okay,” I promise, thus beginning my first interview on-location in the mailroom. “How long have you been teaching in the department?” I ask.

He considers the question, before answering. “I was a teaching assistant here in 1994,” he replies before trailing off. I’m surprised to learn of Mustafa’s lengthy history in the department.

Mustafa interrupts my thoughts, however, by clarifying, “I’ve been teaching here since 2007.”

“And what kind of courses do you teach in the department?” I inquire.

“I teach only language courses.” He explains, clarifying that he instructs “up to sixth semester” Arabic in the department.

I ask if he ever works with graduate students.

Mustafa shakes his head no, adding, “Except for teaching assistants, or if we’re teaching the same course.”

I nod my head in acknowledgement. “What advice do you have for language learners?”

“Use your imagination,” he states definitively, with a warm smile. “That’s the most important element in learning a language.”

I attempt to absorb his advice. “What do you mean by that?”

I ruminate on this advice, while I re-focus the interview on a less academic topic. “What is among your favorite things to do in Madison?” I ask.

“Going to the lake sometimes,” he confesses.

“Going to the lake? Do you have a preference as to which lake?”

“It is Mendota, because this is closer sometimes,” Mustafa insists. “And sometimes there are many talks I can attend around Madison,” he adds.

Conscious of the time and my promise to be quick, I wrap up the interview, by hurriedly exclaiming, “Well, that’s all!”

We part ways cordially, him, scurrying off to his office to prepare for his meeting, and me, gathering my belongings to depart the office for the day. Then, I remember I have forgotten to take his photograph for the website. Out of consideration for this schedule, I am briefly tempted to return another day, but instead, I rush to his office to procure the image. He permits me to do so, but after looking at the photo on my phone, I am convinced that his eyes are closed.

Self-assuredly, he jokes, “No one will notice,” but he nonetheless allows me to take another picture.

When I turn to leave, I ask if he wants me to leave the lights off in his office. He says yes, jokingly citing his effort to “save the state some money,” a twinkle in his eye.

As I walk back down the hall from whence I came, I am aware that I probably won’t work directly with Mustafa because I don’t study Arabic; however, I take solace in the recognition that I can still always rely on him for some kind words and well-intended jokes around the office, and sometimes that’s all I need.