(Part of our “Get to Know us Better” series.) 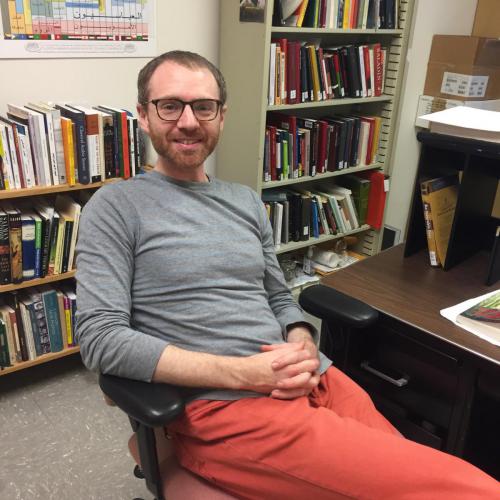 I am sitting on the bench in the space that separates the African Cultural Studies Department from Slavic Languages and Literature, as Dr. England arrives on the fourteenth floor with a ding of the elevator. We acknowledge each other with a smile and a quick nod of the head. Although I have never enrolled in a class with him, we know each other a little because he was gracious enough to serve on the committee that evaluated my previous M.A. thesis for credit in the department. I consider his service all the more amiable because his research on classical Arabic poetry and prose has no relationship to my focus, and he still showed a genuine interest in my defense.

I allow Dr. England a little time to settle in before following him to his office. When I knock on his door and explain the purpose of my visit, we briefly negotiate timing, as he expects a number of students during his office hours, due to the stress of midterms. After clarifying that my interview will be short, Dr. England agrees, and we quickly begin.

“So, how long have you been teaching in the department?” I ask.

“I have been teaching here…,” Dr. England begins, pausing to think of his response. “Depending on how you count, it’s been four years, but I was gone for two semesters, so three years worth of classes and then this half a semester.”

“And where were you for the two semesters?” I inquire. “Uh, I was in California, and I was also doing research in Europe and the Middle East,” he responds. As an afterthought, he adds, “I got some research support.”

“Very cool,” I respond. “And what courses are you teaching this semester?”

“I am teaching our African 201: Introduction to African Languages and Literature, which also fulfills Communication B,” he says instructively. “And I am teaching African 300, Arabic Literature in Translation, theme of con-artists in Arabic.”

“And what courses do you typically teach in a semester?” I follow up.

“That’s pretty representative,” he insists. “This is my second time teaching 201. Sometimes I’ll teach a graduate seminar. I’m looking forward to teaching one of those.” He says, undoubtedly anticipating his graduate seminar, African 901: Imagining Islam, scheduled for Fall 2016. He continues, “300 is a class I often teach, and the theme has varied a little bit. Let’s see, then I’ll teach, in our fourth year Arabic series (African 445), where we move on to reading literature, I teach that too. That’s a great class to teach.”

I nod my head, before asking, “What advice would you have for prospective or incoming students to the department?”

“That’s a good question. What advice would I have?” Dr. England says aloud. “Well, let’s start with prospective students. Don’t believe anything that anyone has to tell you about the humanities and that it’s not valuable anymore.”

“Of course,” I agree emphatically, thinking of no less than five such comments in the past month alone.

He continues, “If you’re unfortunate enough to run into those folks or hear them on T.V, which we’re hearing a lot of now.” Changing his trajectory, Dr. England says, “I think a great thing about the way this university has organized its languages is that we teach Arabic in an African Department. That’s unique. Not many schools at all do that, and it’s helped me to learn a lot from my colleagues, learn a lot about Africa really. And for our students as well, I think they gain a lot. Let’s see, for current students,” he begins. “Are you thinking about graduate students?”

Dr. England states, “For current graduate students, well, you know, get to know us as faculty. There’s still a lot of graduate students I still don’t know, present company excepted, of course,” he says with a warm smile before continuing. “And I would like to know more about what folks are doing. I realize that there’s a very strong push to specialize, but I think it’s also healthy to hold off from that a bit, and some of our colleagues who now teach here, I think, are perfect examples of that, who work in multimedia, who do linguistics along with literature and theory, who are practitioners as well doing criticism, et cetera. I think the plurality of this department is one of its greatest strengths.”

“Certainly,” I concede, thinking of my intention to enroll in his upcoming graduate seminar. “What is your favorite place on campus? Or in Madison, if you prefer?” I add.

“One of my favorite spots on campus is actually this Center for Limnology,” he responds, smiling. “I think it’s a great place to hang out by the lake. It’s very quiet, even though it’s central, and I think the building is interesting. I think it’s pretty much overlooked. That’s probably something I like about it. I like the area around the Observatory a lot too. I really like the view there, and sometimes I’ll take lunches there, just to be myself for a little while. And Madison, I don’t even know where you start. I like Madison a lot. Another day, I can think of my short list of favorite spots,” he says with a small laugh.

“And then, finally, I notice you wear interesting colors, your pants today included,” I state, indicating his vibrant salmon-colored pants. “So, how do these pants reflect your mood, or what do they signify to you that makes them worth wearing?”

“It’s funny that you should mention the pants, because I was just thinking about getting rid of these. They don’t fit me like they used to. But man, I don’t know. That’s a constant give and take,” he says, both surprised and amused by the question. “I’ll tell you one thing: I once wore this, I had a belt buckle that had a funny shape to it, and I noticed that a couple of students mentioned it, and I thought, you know, I should probably get out of the habit of wearing that, because I don’t want the focus to be on what I am wearing or how I look or some kind of tick, of which I am sure I have many. I’d really like the focus to be on the material, so I guess things just vary a lot, depending on whether I am teaching or not. But, you know, I hadn’t given a lot of thought to that. I just think that there’s kind of a drab wardrobe, you know, that’s sold out there, and I think it’s probably a good thing to resist. And I am sure living in California for a long time, in part, contributed to that, for me,” he concludes.

I ask to take a picture of him with his festive pants, and he agrees, though he clarifies he’s not wearing his “teaching garb.” I say it’s okay, and as I leave, he greets another student just as warmly as he did me. Witnessing this exchange, I look increasingly forward to attending his class next fall, for an expanded understanding of African literature, more generally, of course, but also for an opportunity to emulate such a conscientious educator.