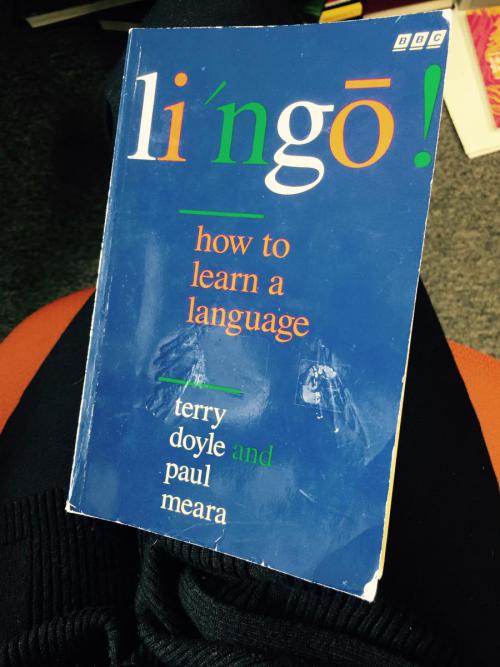 Terry Doyle and Paul Meara’s book Li’ngō! addresses commonly asked questions about the challenges of language learning, and suggests ways to ensure language learning success mainly among adult learners participating in either classroom or self-instruction. The book was originally published in 1991 as a companion resource to the BBC language learning television program by the same name. Doyle—a long time producer and writer for BBC television language programs—and Meara—the Director of the Research Unit for the Centre of Applied Language Studies at the University of Wales—have applied their combined language learning knowledge and experience to create a resource that serves to supplement language learning endeavors. Hence, the purpose of this book is not to directly teach readers how to teach themselves a language, but instead to provide helpful information, tips, quizzes, and exercises to better a learner’s chances of success in mastering a foreign language they somehow learn on their own.

The first fifty pages of the book, the chapter “Getting Going,” are dedicated to presenting and answering what the authors consider to be the top twenty most commonly asked questions about language learning. The authors address inquiries ranging from the most basic—“Why learn a language?”—to more specific questions about grammar, pronunciation, and method in order to demystify language acquisition. The authors provide layered responses that simultaneously consider leisurely and occupationally-motivated language learners. In this introductory chapter, and as a British-centric publication, these questions and responses are geared toward native (British) English speakers learning new languages for personal, business, or holiday travel purposes. Throughout the chapter, the authors promote group learning and multimedia tools (largely produced by the BBC and listed on the book’s inside cover), moving away from “traditional language-teaching [that] emphasized reading and writing” (35).

The following ten chapters each highlight a different language—German, French, Spanish, Japanese, Welsh, Russian, Chinese, Arabic, Urdu, and Greek—and are organized into three parts: 1) background information of the language, 2) an individual language learner experience, and 3) that individual’s learning style. The first part provides the brief background information of the pertinent language, including the approximate number of people around the world who speak that language, the countries that list it as an official language, the language family to which it belongs, whether or not it is a phonetic language, and a brief note on vocabulary and English cognates. The second part moves to a fictionalized individual account, “based on real-life encounters between various adult learners and their chosen language,” and how they “cope with problems you [the reader] might meet” (7). At the end of each chapter, the authors provide a quiz or activity that tests the reader’s compatibility with the learning style of that chapter’s main character.

The authors never noticeably intervene in the narratives (though they create them). Instead, they allow the characters to overcome their own obstacles to meet their unique language needs, using strategies that compliment their life and learning styles. For the fictional John O’Donnell (30 years old), for example, learning Spanish was essential for sufficiently performing his job as manager of a road transportation company that “does a lot of work in Spain” (78). Not having the time to take a Spanish class, John “bought a multi-media Spanish package, and worked through it on his own before he went to Barcelona” (78). Though he used these sources regularly and practiced Spanish diligently, when he got to Spain, he encountered very different set of linguistic realities. John found that most people in Barcelona spoke Catalan, not Spanish. This proved problematic when he was on a lorry that broke down and the driver only spoke Catalan, leaving him stranded. John’s thought in response, formulated by the authors, was that the lorry drivers that worked for his company “needed some elementary survival Spanish, and a few phrases in Catalan, just to impress the customers. He decided that more serious emergencies couldn’t be dealt with except in English, and so he set up a 24-hour English-speaking telephone number that his drivers could call when they needed real help” (79). The authors then emphasize that the language spoken on the ground did not ultimately prevent John from reaching his goal of learning Spanish. According to the authors, John kept with the Spanish cassette tapes he started before his departure, and eventually learned the language after 8 weeks. “What worked for me,” said John, “was listening to the cassettes lots of times” (81).

Rather than offering subsequent analysis, commentary, or explicitly labeling the effective learning style employed by the chapter’s protagonist, the authors let that character come to their own conclusions before jumping to the final section of the chapter: “What kind of language-learner are you?” Using the main character’s learning style, the authors provide a quiz or activity and scoring rubric that allows the reader to assess whether or not they share that character’s learning style. For readers like Jim Saeed learning Welsh, the authors designed an activity that assesses a learner’s ability to find patterns in languages because that was a strategy that proved effective for him (106). For those relating to the nervous Ann Nelson sent to China for a month-long work trip, the authors created a quiz to test foreign language anxiety (130-33). Other quizzes aim to help learners assess their level of motivation, like the quiz designed for Sharon Browne, a primary school teacher trying to decide whether or not to learn Urdu. For that quiz, readers are asked to respond to statements using a scale ranging from “strongly agree” or “strongly disagree.” The authors’ first question for Sharon reads, “On the whole, I like Urdu speakers a lot” (155). Readers are asked to substitute the language they wish to learn for Urdu and rate their interest in the people, culture, and location in which that language is spoken to determine their level of learning motivation.

While this book is a potentially useful resource for some language learners, as these examples elucidate, readers deeply invested in both learning a new language, and more importantly, becoming part of a new language community, will not find the characters in the book very relatable or the quizzes useful. Readers hoping to study African languages, in particular, will also be frustrated by the book’s privileging of what the authors call the “great world languages,” that, with the exception of Arabic, do not include African languages. This might explain why the authors assume that either foreign language classes are commonly offered or that textbooks and accompanying cassette tapes are readily available to all learners who prefer to learn languages on their own. According to the authors, even for those “less commonly taught languages,” which they identify as “Greek, Portuguese or Turkish,” new learning materials are becoming available “as course designers apply modern communicative principles to the design of materials for languages other than English and French” (16). Problematically, language courses and ready-made learning materials are most often not available for African languages, and learners of these languages may be frustrated by these claims as they struggle to find the same quantity and quality of available learning options and materials, and perhaps the same motivations as the language learners the authors had in mind.

Moreover, the quizzes and exercises provided to help learners identify their own learning styles and strengths, presumably for self-directed study, heavily rest on these assumptions. In the case of Maureen Hart, for example, learning German from a book proved difficult because “German spelling isn’t the same as English” (59). The authors assert that, just as Maureen discovered, learning a language from written documents is not ideal. “It’s always best,” they write, “to start learning a language from a tape or from a combination of book and tape” (61). The authors make no attempt to suggest ways to identify language patterns, but rather suggest that learners “need to use [their] ears not [their] eyes” to learn a language (62). For students of African languages without access to tapes and textbooks, and often dealing with entirely new language structures, sounds, and in some cases, scripts, the quiz and the authors’ advice offer little help.

Overall, I did not find this book to be in line with the learning goals or the ethical underpinnings of language learning shared by highly-motivated and deeply-committed lifelong language learners. Many of the book’s more general suggestions, including utilizing myriad sources and working with others, are of course sound advice. However, there are other sources and strategies that are much more useful for students learning African languages. I would absolutely recommend this book to a Briton interested in learning Italian for an upcoming holiday to Rome, but I cannot endorse this book for anyone seeking to establish a deeper, permanent relationship with a foreign language.