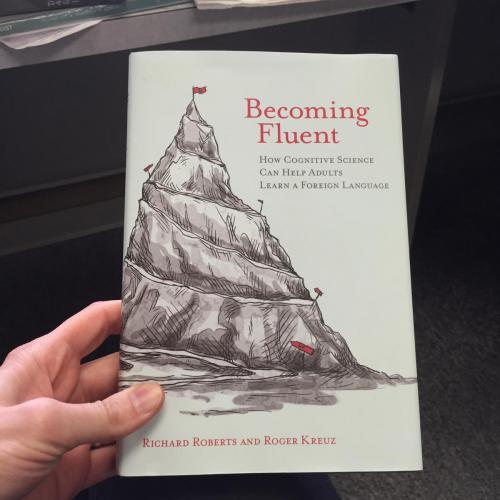 Cognitive science is an interdisciplinary effort to understand the nature of the human mind, drawing from fields as diverse as neuroscience, linguistics, psychology, education, and others. The authors of Becoming Fluent are both cognitive scientists who have themselves undertaken language learning as adults. The authors draw from their own personal experience, as well as from numerous studies across disciplines, to describe a set of strategies of language learning that applies scientific understanding of how the mind works to the particular project of learning a language as an adult.

There are a number of core concepts that the book highlights. The first is that adult language learners are in many ways at a distinct advantage when it comes to language learning. Adults have already successfully acquired knowledge in a wide variety of arenas, and in fact, have already successfully mastered the process of language learning – for their own language. Rather than focus on adults’ slower mental processing speed or smaller amount of working memory, the authors posit that the emphasis should be on adults’ superior ability to plan, take ownership over their learning process, reflect on their successes and challenges in learning, and make necessary adjustments. A second, and related, theme of the book is the importance of using metacognition, metamemory (self-reflection about memory and the process of using memory), and metalinguistics, to improve language learning capability. By putting effort into thinking about one’s own thought and memory processes, as well as developing an awareness of how the target language works in the real world, the authors argue, adult learners are poised to succeed.

The third core component of the book is availability of a wide range of research on topics related to learning, mental processing, and memory, and the necessity of finding ways to apply this research to our real lives as language learners. The authors provide many examples of this research, alongside recommendations about how to put it to use in one’s own language acquisition. For example, the authors return time and again to the idea that the best way to study is to do it regularly, to keep focused on a small amount of information at a time, and to switch frequently between topics. This distributed practice relies on the creation of effective study habits (18 – 23) and research shows it is much more effective than massed practice, better known to us as cramming. Distributed practice is shown to help memories reach a state of permastore, which means that they are “durable, resistant to forgetting, and that can last for more than twenty-five years” (148). Additionally, evidence shows that as our brains tire of learning one type of information, if we switch to a new set of information, and then return to the initial set, we will see improvements in our memory of the first set. This is called release from proactive interference (137). These are just a couple of concepts that the book introduces; the fun of the book is the sheer quantity of experiments and studies described, and the applicability of all of that research to one’s own language learning practice.

Offering the book as a resource for adult language learners, the authors are adamant that adults have a unique advantage compared to children when it comes to language acquisition. Though the authors frame this as a contrarian statement, other work supports this view. Leaver, Ehrman, and Shekhtman (2005) concur that an adult’s previous, typically extensive, experience learning their native language gives them an advantage in understanding systems of organizing language. Like Roberts and Kreuz, Leaver et al concede that adult language learners will undoubtedly have a harder time achieving native pronunciation than children, however, both sets of writers also agree that foreign accents are not really problematic as long as the learner is able to be understood.

The importance of goal-setting as a first step towards language learning, and the planning needed to reach those goals, is another theme across the literature. Roberts and Kreuz encourage learners to set goals which are lofty yet attainable, which echoes a central recommendation of Marshall (1989, 34). Roberts and Kreuz also urge learners to assess their self-efficacy (a belief in one’s own ability to learn) for language learning in general, as well as for the distinct skills that language learning requires, and to use that understanding of self-efficacy to plan a course of study which builds upon their strengths while aiding places of weakness. A learner’s self-efficacy can greatly impact their motivation, which in turn impacts the degree of difficulty of the learner’s goals, which ultimately impacts their learning outcomes (Wenden 1998). If goal setting is step one of language learning, then designing a plan to achieve these goals is step two. Roberts and Kreuz spend some time on the metacognitive strategies that can set up learners for success in planning. They warn of the planning fallacy, which is the mistake that learners make by thinking that things will be easier, quicker, and cheaper than they really will be. Marshall’s thorough guidelines for planning and goal-setting (35-39), describe many of the factors influencing a person’s language learning planning. The cyclical nature of his goal-setting and evaluation exercises, provide a useful tool to prevent falling victim to the planning fallacy.

Effective language learning is never done in a vacuum, and much of the writing about independent language learning focuses on the importance of culture, both as a way of understanding the context in which the language is embedded, and also as a tool to improve language learning. The real-world application of language, or pragmatics, is of primary importance to Roberts and Kreuz, and they are in good company. Marshall’s emphasis on in-situ learning, in partnership with a language mentor, provides learners with extensive cultural-linguistic immersion. The Peace Corps’ guide to language learning (2000) also suggests working alongside a language “helper,” someone to primarily assist with spoken language, but also with other forms of communication: facial expressions, gestures, and body language (8). By integrating a range of knowledge pertaining to culture, physical expression, and the language itself, learners will be much better equipped to fully express themselves in the target language. Roberts and Kreuz go so far as to say that learners should expose themselves to idioms, metaphors, jokes, and other, more playful, forms of language from the very beginning of their study. They argue that it is only through proficiency in all elements of a language’s culture that a learner will truly be able to express him or herself.

The cognitive science approach clearly supports much of the accepted best practice for independent language learning, as demonstrated above. However, some of the conclusions that cognitive science research comes to runs counter to the directives of other approaches. Take, for example, the oft-repeated instruction to avoid direct translation, and to avoid using one’s native language as much as possible. For example, Marshall states his preference that mentors not speak the learner’s native language at all (60), and the Linguist-Informant method (Nicholson 1948) focuses on the repetitive pronunciation of pre-written sentences in the target language. Neither of these methods take advantage of the learner’s previous experience with learning language, nor the relationship that the learner’s native language may have with their target language. Roberts and Kreuz argue that having a grounding in the metalinguistics of one’s native language will provide the language learner an invaluable tool (101).

Another place of divergence is the advice that some authors give to focus exclusively on speaking skills and pronunciation, and to generally avoid reading and writing. The NASILP method (NASILP 2014) is a perfect example of this: it encourages sentence drilling and discourages reading along or relying on written notes. However, it appears NASILP might be removing a valuable tool from an adult language-learner’s toolkit. Roberts and Kreuz credit a common metacognitive mistake for the tendency of English-speakers to discourage writing as a tool of language learning. Since English is a language that features many spelling irregularities and exceptions to rules, it is easy for native English speakers to assume that all languages have high levels of irregularities and exceptions. However, languages fall on a spectrum of these types of irregularities, and in fact many languages are much more regular than English. By removing ourselves from the operating framework of English, we are able to recognize that reading and writing can in fact be incredibly useful for adult language learners, especially for languages that have a high degree of regularity (Roberts and Kreuz, 2015, 34-36).

According to Roberts and Kreuz, cognitive science research does not seem to support a language learning approach that focuses on memorization, drills, and other forms of rote learning. There is ample evidence that concepts that are learned at a deeper level, or to which we make a personal connection, are better remembered than items that are memorized based on words or sound alone (121). This conclusion calls into question the efficacy of the rote memorization approach advocated by NASILP and the Linguist-Informant method.

Becoming Fluent’s final unique contribution to the literature is its suggestion that adult language learners look to mentors that share their language journey rather than mentors that are native speakers of the target language. They note that most children learn from non-native speaking teachers, and most adults are encouraged to seek out a native-speaking mentor. However, Roberts and Kreuz lay out the many ways that a non-native speaking mentor can be of particular use to an adult language learner: their mastery of the language is more recent, they empathize with the particular challenges an adult learner faces and can suggest ways forward, and they can help explain cultural difference that a native speaker might take for granted. This conceptualization of a language mentor is completely contrary to the Marshall’s focus on a native speaking mentor, and the Peace Corps’ native speaking helper, among others.

Overall, Becoming Fluent is an engaging read, full of fascinating facts and numerous examples touching on a wide range of disciplines. However, the larger logic of its structure tends to get lost among the plethora of anecdotes and suggestions. Therefore, it seems most useful as a series of strategies for an adult independent language learner rather than an overarching approach to learning a language. I would definitely recommend this book to any adult language learner for its perspective and its highly-applicable tips, though I think it is best used as a supplementary source of information.