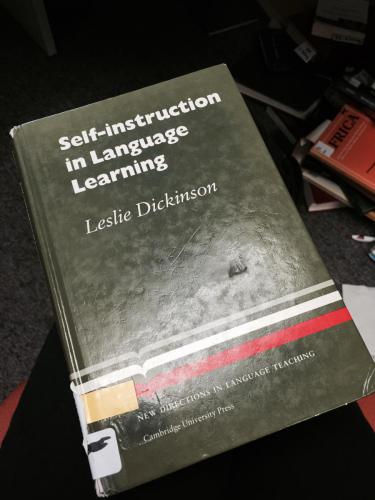 Developed as a manner in which to “introduce… greater flexibility into institutions and into language learning classrooms,” Leslie Dickinson’s Self-instruction in Language Learning outlines procedures and techniques to encourage self-direction or learner autonomy in foreign language education (1). To achieve this goal, Dickinson divides the text into two parts, “Basic Issues in Self-Instruction” and “Facilitating Learning.” The first part provides the definition of self-instruction as “a neutral term referring generally to situations in which learners are working without the direct control of the teacher,” distinguishing it from other pertinent terminology such as self-direction, autonomy, semi-autonomy, self-access materials, self-access learning, and individualized instruction (11). Dickinson concludes this section with a chapter on why self-instruction is an attractive option, and his explanations include practicality, the production of increased educational goals (e.g. autonomy), and the encouragement of life-long education.

The second part of Self-instruction in Language Learning constitutes Dickinson’s largest contribution, however, in its concentration on “the implementation of self-instructional systems; the materials the learners need…, and the ways in which both learners and teachers can be     prepared for self-instruction” (41). The third chapter outlines a variety of self-instructional     systems, both for adult leaners and those in secondary school, while the fourth chapter identifies materials for self-instruction, which Dickinson details as “authentic texts used directly by the learner; commercially available courses and other materials… and materials which are specially written by the staff of the institution” (68). The fifth chapter examines the manner in which     independent learners require much of the support usually provided by teachers, and it suggests the use of needs analysis, learner contracts, and peer support, while the sixth chapter concerns itself with making the necessary materials available to learners through a self-access resource facility such as language lab. The seventh chapter prepares teachers, adult learners, and school learners for self-instruction, both at the psychological- and methodological-levels. In particular, and acknowledging a shift in the traditional teacher’s role, Dickinson insists that the ideal teacher “has confidence in the learner’s ability to make appropriate plans and arrangements for his learning. He has a high regard for the learner’s skill in planning his own work, and does not want to take away…control of the decision making” (123). Finally, the eighth chapter emphasizes the significance of self-assessment, outlining a number of possible strategies, all the while explaining that “self-assessment emphasizes learning, the process, rather than the results, the product” (151).

In the fifth chapter, “Supporting the Learner in Self-Instruction,” Dickinson outlines a similar model of need analysis to the one in the third chapter of Terry Marshall’s The Whole World Guide to Language Learning. Indeed, using the University of Cambridge Needs Analysis, he encourages independent language learners to answer questions pertinent to motivation, aims, functions, information, and activities, which is not unlike Marshall’s insistence that learners assess their goals, because they “reflect what we honestly hope and expect to accomplish” (Marshall 33). Echoing Marshall’s implementation of a daily learning cycle reflective of learner goals, Dickinson argues for the usefulness of a learner contract, which he describes as “an agreement between the learner and the tutor, or between the learner and himself” (99). Unlike Marshall, however, Dickinson writes of a context that does not involve in-situ learning, but instead a circumstance in which independent-learning is meant to enhance the language classroom or in which students have access to pedagogic support. Accordingly, Dickinson recognizes that teachers may need to assist learners in the development of a learner contract, and he further insists that “the learners’ practice in contract completion is restricting to identifying needs/objectives,” whereas the teacher is responsible for determining how learning is to be done, what materials are to be used, and achievement will be assessed (102). Due to the different contexts about which Dickinson and Marshall write, they present community formation to support self-instruction in markedly different ways. Indeed, while Marshall sees the validity in associating with native speakers, whom he classifies as mentors, family and immediate friends, acquaintances, and strangers, Dickinson recognizes the comfort to be found in practicing with a fellow learner or amongst a self-help group. He, however, also speaks to the value of a native speaker, particularly as an informant or in the context of a language exchange.

When discussing the function of native speaker as informant, Dickinson clarifies that the learner is to approach the informant only to seek specific information, including pronunciation, sentence structure, and meaning. Dickinson emphasizes that “informants are not teachers and that should be made clear to both the informant and the learner,” but, according to the author, this does no harm to the student’s interest in self-instruction (104). Like Dickinson, Helen S.     Nicholson recognizes that the informant’s role is not that of a teacher in her article, “Learning by the Linguist-Informant Method,” but unlike Dickinson, she constrains the informant’s role to pronunciation alone and explains that, due to the presence of a linguist, “no explanation of what was wrong with … [students’] sounds was given by the informant” (616). Furthermore, the context which Nicholson describes is located in a classroom, and though the informant is always present to recite pre-determined sentences, little space is given for the students to construct their own sentences, unlike Dickinson’s model of self-instruction.

Conversely, Dickinson also examines the possibility of a language exchange, in which, for example, “a native speaker of English…wishing to improve his knowledge of French, works with a native speaker of French wishing to improve his knowledge of English” (104). Dickinson’s language exchange then becomes consistent with an informal learning strategy described in “Peace Corps Volunteer: On-going Language Learning Manual- Beyond Hello,” in which the author encourages learners to “try having a conversation in which you speak English and your language helper speaks her language” (43). Marshall, in “The Multi-Language Seminar: An Approach to Offering More of the ‘Less-Commonly-Taught’ Languages,” however, argues that though providing an English speaking-skills class to language mentors, it is important that “a mentor’s English-language mentor is different from his language student. Not to do so is to confuse the roles and torpedo the mentor/learner relationship” (160).

Finally, and I wish to emphasize this point again, the context described in Self-instruction in Language Learning is different from the one in which many independent learners find themselves, insofar as it presents independent learning as a supplement to a traditional language classroom or as a circumstance in which learners have access to a teacher. Of course, Terry Marshall’s A Whole World Guide to Language Learning and “Peace Corps Volunteer: On-going Language Learning Manual- Beyond Hello” recognize the value inherent in in-situ language learning without a traditional teacher, while Marshall’s “The Multi-Language Seminar” and Nicholson’s “Learning by the Linguist Informant Method” offer alternative methods of language-learning outside of the target language community with a teacher and/or guide. Dickinson, however, is unique in that he argues that the teacher’s role changes to that of a helper, and he argues that these helpers must have knowledge in their students’ first language, as well as “the target language in order to help the learner with… needs analysis,” setting objectives, linguistic analysis, materials preparation, assessment procedures, learning strategies, management and administration, and librarianship (123). Despite the inclusion of independent learning then, Dickinson’s model of self-instruction still requires the presence of a course of instruction and a substantial effort on the teacher’s part, albeit different from a traditional classroom setting.

To conclude, I would recommend Self-instruction in Language Learning to those who wish to study a language independently, as Dickinson himself argues “any discussion of self-instruction is to a large extent a discussion about language learning in general”; however, there are a few alterations that might be required for the purposes of learners outside the traditional classroom (153). Indeed, the text tends to rely on very technical aspects, as well as prescribed notions of what constitutes language-learning, which may not be useful in every case, particularly those that are not in possession of the resources described. Furthermore, the model’s reliance on a teacher for language instruction, and not just pedagogic assistance, is in sharp contrast to the model many independent language-learners often seek. Where Dickinson falls short in accounting for independent learners’ methodology, however, he presents us with opportunities to modify the approach he outlines to our particular needs.