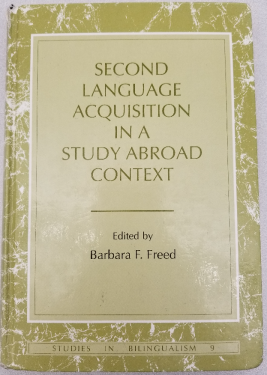 Second Language Acquisition in a Study Abroad Context is a fascinating collection of research which question long-held assumptions about study abroad and its best practices. Most shockingly, this book presents multiple studies that challenge the popular basis of studying language abroad: the belief that “the only way to achieve real fluency in a foreign language is to go to a place where it is spoken” is outed as a “myth” (Ferguson and Freed 1995, xii).  That being said, this is not a simple “myth-busting” book, but an extremely thorough attempt to provide quantitative analysis of many assumptions commonly related to study abroad programs. By putting claims to the test, in addition to formulating new hypotheses and uncovering new findings, Second Language Acquisition in a Study Abroad Context cuts through the noise of popular opinion and puts forth concrete findings from which to draw rational conclusions about the interplay of language immersion and classroom study. Thus it is helpful for self-instructed language learners who are uncertain about their futures with study abroad and may otherwise feel an unwarranted sense of “fear of missing out” or inadequacy living domestically.

The book is organized into five parts and thirteen chapters. Each chapter is based on a different study tackling issues relevant to studying abroad. How effective is studying abroad compared to domestic classroom study? Who responds best to the study abroad environment? How do different methods of study abroad impact OPI scores? But due to the difficulties inherent in conducting research of such magnitude, including differences across programs, expense, class sizes, etc., this book acknowledges its limitations and (responsibly) balances its conclusions with calls for more research. I found this book and its organization very refreshing compared to the troves of self-help books written from little more than the egos of self-declared language gurus, and believe its novelty and relevance far supersede any of its ponderousness as an academic work. At the very least, this book serves as a rational counterpoint to oft-repeated anecdotes in the field of language study, and more, a critique of the merits of anecdotes in general for determining language curriculums.

So, the elephantine statement in the room: Barbara Freed writes in the introduction, “there is conflicting evidence in the SLA literature about the effect that an out-of-classroom experience has on language learning as well as on the interaction of classroom-based study and immersion in the natural environment” (6). Freed cites many studies that concluded informal, out-of-class language experiences (the hallmark of study abroad) “does not necessarily enhance … and may even impede second language acquisition”(6). Of course, conflicting evidence abounds and Freed also cites many studies claiming the opposite, though many conspicuously lack control groups. The difficulties in SLA abroad were mentioned by Terry Marshall in his book The Whole World Guide to Language Learning. Marshall found that hundreds of Americans returned from living or working abroad with no significant SLA gain; however, Marshall did not mention that even those enrolled in quality SLA classes abroad were still subject to similar results to domestic study.

On the side of study abroad skeptics, Freed mentions the case of two groups of otherwise similar Chinese students, one of which studied English at a Chinese university and the other of which studied abroad in the U.S. Later, both groups were tested on English grammar, with the students who remained in China outperforming those who studied abroad.

This trend has held true for other testing methods. Especially important to proponents of study abroad is the hard-to-quantify quality of “speaking like a local.” However, in one chapter, we learn about researchers who assembled a panel of native French speakers and asked them to rate the proficiency of American students of French. These students were divided into two groups: one studied abroad in France for a semester while one took classroom instruction domestically. Not only were improvements in the OPI roughly the same for both groups, but the panel of native French speakers was unable to notice differences in the improvement between the two groups. The researchers were shocked and ran as many analyses as they could, but the results remained the same.

Additionally, the book cautions that while studying abroad may provide students with greater clarity and rapidity of speech, they also have a tendency to over-generalize grammatical structures. Another study also demonstrated the failure of students studying abroad to evaluate themselves in any manner that could be correlated with gains on language tests. Finally, the authors identified deficits on the part of colleges to measure and teach languages. One study found that 80 percent of respondent colleges made no effort to pre- or post-test their students who studied language abroad, leaving differences between students who studied in the classroom and abroad to subjectivity and anecdotes. Moreover, in another study only 13 percent of seniors with four years of college Russian tested as at least Advanced in the OPI, whereas 40 percent of students returning from a semester in Russia met the Advanced standard. Though this statistic technically favors study abroad vs. traditional language curriculums, the book later describes domestic intensive language study as roughly equivalent to study abroad in effectiveness. Domestic intensive language study can take many forms, including the rigorous methods used to quickly train soldiers for assignments abroad as seen in the Defense Language Institute and other renowned language-learning institutions. At such levels of intense studying, the differences between the effectiveness of study abroad and domestic study narrow considerably.

There are other studies mentioned throughout the book, with conclusions not wholly favoring study abroad or domestic classrooms. Notably, a study of students studying Japanese in Japan vs. the U.S. favored the abroad students, though they spent the majority of their days studying in classrooms, with one student writing “I may as well not be in Japan” (187).  Another researcher also determined study abroad to be favorable, but found what she called a “crowning irony: “students were quick to denigrate the classroom environment as artificial, but tried to recreate classroom environments abroad, even blaming locals for “not playing their part” (311). Marshall also voiced these frustrations as inherent to living abroad, evidencing this de-motivational aspect of SLA abroad.

While the book tentatively concludes that on the whole studying abroad is superior to classroom study, it also admits that individuals’ differences are one of the – if not the – most important factors in determining study abroad outcomes. In the most data-heavy chapter, researchers attempted to understand who benefits most from studying abroad. Some of their findings include:

And in a demonstration of one of the weaknesses of language testing, it was also found that students with less language proficiency gained more than students at higher levels. This is due to the so-called “ceiling effect” which biases against gains at higher levels, whether due to the difficulty inherent to testing at such levels or improving at them. Surprisingly, this contradicts common perceptions that lower-level students do not gain as much as upper-level ones abroad.

Another hard-to-test factor in SLA abroad is individuals’ tolerance to ambiguity, mentioned as necessary in Peace Corps literature, as well as individual factors such as anxiety, motivation and self-efficacy, all of which are pressured abroad. These factors are relevant to us as students with the intention of someday returning abroad, and can help explain general feelings and differences between language aptitudes while abroad. Also, greater research must explore the theory, corroborated by many of my colleagues, that inebriation boosts language skills by reducing such anxiety, as “Students also report that speaking Russian becomes easier after they have had several hours of exposure and have warmed up, e.g. when drinking” (308).

While the book tended to focus on college study abroad programs, one chapter discussed the interesting case of the Peace Corps and its language teaching methods. The Peace Corps method differs in many ways, including having the central purpose of increasing volunteers’ FSI scores (the Foreign Service equivalent of the ACTFL proficiency scale), mixing 4-8 hours of daily classwork while abroad and tailoring classes to individuals’ needs. The study concludes that the standard 11-12 weeks of Peace Corps language training, which is constantly refined and updated to pursue FSI gains, beat both a semester of intensive study abroad in Spain or 15 months of conventional classroom instruction in the U.S. for language gains among students. While some Peace Corps literature focuses on independent language study after this program, we cannot ignore its foundation in high-intensity instruction beforehand. Being neither a conventional study abroad nor domestic classroom experience, the Peace Corps’ success nonetheless influences both methods of instruction throughout the U.S.

While Second Language Acquisition in a Study Abroad Context does not often directly contradict long-held beliefs in the field of SLA, it sheds important light on them. Namely, that the complications of studying abroad, including stress and anxiety, though surmountable, may nonetheless statistically affect results to the point of being similar to those of domestic study. The elements of success while studying abroad, especially independently, including well-planned cycles of deciding, preparing, practicing, communicating and evaluating, may often go awry. It is telling that the most successful study abroad programs analyzed, including the Peace Corps and in Japan, inundate students with classroom activities to the point where they cannot get out much. Of course, we do not send students abroad to “hang out,” but the rigidity of the most successful practices suggests that independent study may be best practiced in conjunction with periods of intense language study.

The book’s suggestion that student self-evaluations on questionnaires bear little correlation to language test scores also throws a monkey wrench into the belief that independent language learners can adequately evaluate themselves without training. In conjunction with colleges’ tendencies to not evaluate the efficacy of their language programs with pre- and post-tests, this leads me to believe that at least an annual OPI should be a component of independent language study. While not perfect, such testing provides some standard by which we can comparatively evaluate progress, which is especially important as our government funds such college language programs with the intention of producing results.

In short, if the goal of language study is to produce results, then to make a large distinction between “the classroom” and “studying abroad” is counterproductive, and I agree with those of the book’s authors who only ask for pragmatic solutions to make the most of either environment. I take the view of the researchers Laura Miller and Ralph Ginsberg, who in their chapter wrote: “rather than uncritically accepting platitudes about how advanced levels of competence can only be achieved with study abroad, a more analytical and empirical approach toward what actually is involved in learning, abroad and at home, needs to be adopted” (313).