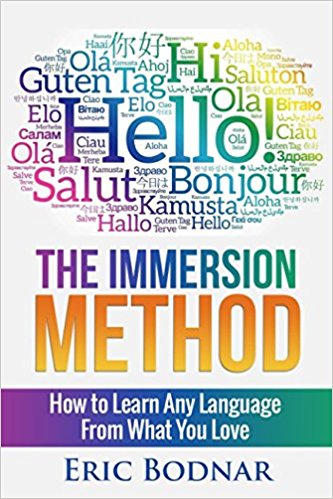 Eric Bodnar taught English in South Korea for four years and now teaches English in Japan. He relocated to South Korea with only survival phrases at his disposal and spent the work day teaching his native language. This experience makes it difficult to fully immerse in the community, so Bodnar took to independent study after work and on the weekends. His method for learning Korean consisted of conversation with a native Korean mentor, vocabulary exercises using the Anki app, and immersing himself in authentic materials from YouTube and local television such as K-Pop and anime programs. His other books include Fluent Korean from K-Pop and K-Drama, Fluent Japanese from Anime and Manga, and Japanese is NOT That Hard: How to Learn the Japanese Language the Fast and Simple Way. In this review, I analyze Bodnar’s independent learning method, give an overview of the applications he recommends, and evaluate the usefulness of his method for other independent learners of less commonly taught languages.

For a beginner like Bodnar embarking on self-structured language study, it is important to first determine what Russian psychologist Lev Vygotsky defined as the “zone of proximal development.” Roberts and Kreutz describe this zone as “the metaphorical region between what a learner can do without help, and what a learner can do only with assistance and guide from a teacher” (29). Bodnar’s “zone of proximal development” is either immense in that he seems to do everything without help, or it is undefined in that he never explains when he does and does not need assistance from his language mentor. In The Immersion Method, Bodnar omits any description of the learning method developed between himself and his language mentor. The native Korean mentor goes unnamed and is only mentioned in one sentence of the book. From this, the reader might infer that the relationship was an unproductive one or that Bodnar preferred to study independently. Though Bodnar was living in South Korea for four years, his “immersion method” puts no emphasis on interaction or interpersonal relationships with native speakers. Before referring to The Immersion Method for advice on self-guided study, a language learner should first consider his/her learning style in comparison to that of Bodnar.

Bodnar claims his book will help beginners attain “fluency,” and he recommends three primary sources: 1) only one very comprehensive textbook, 2) a flashcard app, and 3) “native-level materials.” There is no explicit definition of fluency offered in The Immersion Method, but the inferred objective to following this method is the ability to comprehend and explain to others “native-level materials” such as novels, television programs, and web materials in the target language. Bodnar recommends one core textbook to serve as a primary guide for early vocabulary, useful phrases, and grammar explanations at the early stages of language learning. He stresses that language learners often make the mistake of relying on textbooks for too long, and that “there is no need to finish your initial coursebook before you try learning directly from fun native-level materials” (Immersion Method, “A Most Common Mistake”). This is where Bodnar places emphasis on enjoyment rather than improvement over a set timeline. The textbook serves only as a springboard for obtaining enough basic knowledge to understand beginner level authentic materials. Bodnar’s recommended mindset for this early stage is to “rather learn like a [Korean or Japanese or other] kid than an American adult” (Immersion Method, “Foreign Language Video Tape”). It is better to learn basic language skills from children’s songs and absorb through imitation of native speakers than to struggle through a boring textbook which may, he suggests, lead to early burnout. I disagree with Bodnar on this point; where he associates boredom with language learner burnout I would associate it with a poorly mediated engagement with the source material.

Though I remain unsold by Bodnar’s method overall, I do agree with his independent method for seeking and remembering grammar explanations. As Roberts and Kreuz point out in Becoming Fluent: How Cognitive Science Can Help Adults Learn a Foreign Language, two advantages to being an adult language learner are the ability to read and adults’ “full range of metacognitive and metamemory abilities” (9). Unlike children in most cases, adult language learners are conscious of how they learn and remember information best and can capitalize on this awareness. In order to self-teach and remember a complex grammatical structure, Bodnar recommends simply searching for the best explanation on the internet and memorizing an authentic example. This is a strategy I have often employed while reading or writing in my target language after the textbook has been left behind and it would take too much time to find the specific textbook page of the grammatical construction. In addition, explanations by native speakers or writers who regularly use the grammar are sometimes more beneficial than the instructional descriptions found in textbooks. Regarding memorization from authentic materials, Bodnar reflects that “lengthy grammar explanations can be easily forgotten, yet a large context from a story that we truly care about can burn in our memory for years” (Immersion Method, “An Alternative Course”).

Very similar to the method described in the National Association of Self-Instructional Language Program’s “Student Study Guide,” Bodnar recommends a form of “tape work” in short focused sessions throughout the week in order to build a habit of daily immersion in authentic materials. His version of the “foreign language video tape” is YouTube. For all stages from novice to superior Bodnar recommends building YouTube playlists from videos aimed at pre-school children to short television programs for adults. He recommends daily watching/listening sessions of 20 focused minutes in which the learner does not stop or pause the video to search for vocabulary. Bodnar advises the learner to only jot down three or four high-frequency words for comprehension and search for meaning later. After deciphering the high-frequency words, the learner can watch the video again and see how much more he/she can understand from those crutch words and context in the video. This focused daily activity is less regimented than the instruction found in the NASILP study guide. Again, Bodnar emphasizes the importance of enjoyment for promoting longevity in the language learning process, instructing learners to “take pride in constructing a great playlist of videos that are informative, entertaining, and re-watchable. Add videos that teach you something about the country or people that you were unaware of before” (Immersion Method, “Escape the Language Learning Bubble”). I have used a form of this watching method using the videos provided with the Al Kitaab textbooks and my own Arabic language mentor uses this method to expand her knowledge of English, stating that 20-minute vlogs on YouTube help her absorb a realistic amount of vocabulary and cultural knowledge each day. Curating my YouTube playlist is a method I am open to trying after reading this book.

Another digital method for learning vocabulary that Bodnar recommends is the Anki app. After downloading the app and finding that it is not very user-friendly and more suited to learning Japanese and Korean, I decided to use the Quizlet app instead. Much like the YouTube routine, Bodnar stresses short daily sessions playing the vocabulary games on the app and regarding the activity as “training” rather than “review” (Immersion Method, “Reviewing vs. Training”). It is very easy to mindlessly review 20-50 vocabulary words without truly memorizing them for future use. Bodnar stresses the importance of mixing “old” vocabulary words with new ones by studying 10 old worlds per each set of 10 new words. This slows down the process, forcing the learner to evaluate whether a cluster of words has actually been memorized or is simply recognizable. I personally abandoned the flashcard method after my second year of Arabic study, but now after realizing that I constantly need to look up the spelling of words while writing, I am inspired to try this method using the Quizlet app.

In The Immersion Method: How to Learn Any Language from What You Love, Eric Bodnar provides some useful tips for memorizing vocabulary and absorbing authentic material according to one’s personal interests and enjoyment. While a few of his methods seem realistic to implement and promote life-long language learning, the lack of emphasis on interpersonal relationships with native speakers and the omission of community involvement, in general, raises a few red flags. The Immersion Method does not cite any experts or language instructors; it is a book entirely based on Bodnar’s own self-taught experience. It is self-published and has no page of acknowledgments which brings into question not only Bodnar’s credibility as an author but his credibility as a “fluent speaker.” The Immersion Method reads as self-promotional more so than instructional. Bodnar is what Roberts and Kreuz might call a “language zombie” or someone who learns a language simply for the sake of accomplishing personal goals rather than “using the language to maintain interpersonal relationships” (66). Though he is self-described as fluent in both Korean and Japanese, Bodnar’s lack of interaction with native speakers and lack of specific methods for self-evaluation makes me question the efficacy of his “immersion” method.

Bodnar, Eric. The Immersion Method: How to Learn Any Language from What You Love [Kindle version]. Eric Bodnar, 2017. Retrieved from Amazon.com.

Bodnar, Eric. Japanese Is Not That Hard: How to Learn the Japanese Language the Fast and Simple Way [Kindle version]. Eric Bodnar, 2016. Retrievable from Amazon.com.