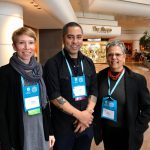 In 2020, Neni Panourgia, Jason De León, and our own Katrina Daly Thompson will become the new co-editors of Anthropology & Humanism.

Anthropology and Humanism concerns the central question of anthropology: what it is to be human. AH welcomes contributions from all major fields of anthropology and from scholars in other social science disciplines, as well as the humanities. It seeks to bring out the intricate and contradictory processes of life in other cultures—including those of anthropologists. The journal strives to maintain a focus on human actors themselves. Anthropology and Humanism publishes work in a variety of genres, including fiction and creative nonfiction, poetry, drama, and photo essays, as well as more conventional articles and reviews. The journal is published semi-annually by the Society for Humanistic Anthropology.