The Films of Paulin Soumanou Vieyra 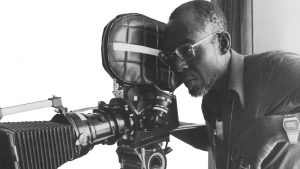 These screenings will be followed by a Q&A with Stéphane Vieyra, Paulin’s son.

Long overshadowed by those he mentored, Paulin Soumanou Vieyra is one of the godfathers of African cinema. Born in Benin, Vieyra was the first black African to direct a film, Afrique-sur-Seine (1955), an inquisitive and yearning documentary about young Africans studying in Paris. After settling in Senegal, Vieyra taught and frequently collaborated with leading directors like Ousmane Sembène. Vieyra’s vocation as a historian of African cinema and culture motivated his own illuminating short documentaries.This special program presents four rarely seen films by Vieyra: Afrique-sur-Seine; Lamb (1964), a thrilling look at beachside Senegalese wrestling; Birago Diop (1981), about the famous poet; and L’envers Du Decor (1981), an essay film produced behind the scenes of Sembène’s Ceddo (1977). Support for this program has been provided by Cultural Services of the French embassy in the United States. Special thanks to Laurence Geannopulos. (ZZ)