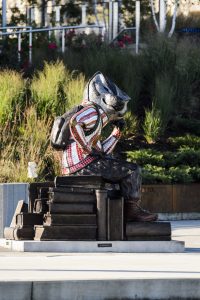 Please register in advance at this link.

In this presentation, I will review existing scholarship on masculinity in Africa, a topic that has recently attracted a wide range of inter-disciplinary interest, from gender studies to history. Focusing on themes and topics that have preoccupied scholars in this area, this review demonstrates that masculinity in Africa is not just a socially and culturally constructed identity, but is also relational. I begin with a description of the subfield of Critical Men’s Studies within gender studies before delving into specific topics of this review, including the importance of considering social and cultural contexts, masculinity as influenced and affected by femininity, the influence of economic status, hierarchies of masculinity, language, heteronormativity, and the need to decolonize masculinity studies.

Jongé is a set of embodied and discursive practices revolving around Senegalese womanhood, femininity, and sexuality. While these practices emerged in Senegal, they continue in the diaspora. Senegalese migrants to the United States not only bring these practices with them from home, but they also socialize their descendants to it. Within the diaspora, jongé becomes an ideological site in which women continue to negotiate its meanings. Through analysis of interviews with six Senegalese women in the US, I argue that, as transnational subjects, Senegalese women in the diaspora deconstruct hegemonic interpretations of jongé and underscore their individuality when defining the practice. I also argue that (re)definitions of the concept are a site of negotiation of gender and sexuality. Engagement with jongé in the diaspora demonstrates how not only cultural practices but even conceptions of gender gain new meanings when transplanted into a different context.

My presentation will focus on women survivors of the four-year-long land-related conflict in Mt. Elgon between 2005 and 2008. Based on my ten-month ethnographic study, I explore how the conflict created layered victimhood. I also demonstrate how these women redefine themselves anew and transcending the simplistic conceptualization of victims (as innocent and forever-victimized) and provide us a new understanding of “survivorship.” By interpreting survival from the vantage point of the local connotations of the Swahilicized kusavaivu (as living on despite), I explore how Mt. Elgonian women have become agentive in how they remember suffering. I situate survivorship in the local connotations of surviving, specific to women’s individual experiences and how they navigate traumatic memories’ challenges to unite, heal, raise families, and advocate for peace. This specificity in conceptualizing surviving—as kusavaivu—draws inspiration from and goes beyond the conceptual limitations of survivorship as advanced in war and victimhood scholarship.

1:30 pm Rachel Hodapp (Anthropology), “Towards a ‘Feminism Without Borders’: Olkishoroto and Maasai Women’s Activism in Tanzania

In a world shaped by colonial legacies and neoliberal practices, what does effective political action look like? Mohanty’s (2003, 3) “feminism without borders” urges feminists to take up an “antiracist framework, anchored in decolonization and committed to an anti-capitalist critique” to realize a socially and economically just politics rooted in transnational solidarity. In this presentation, I posit that women’s activisms in Africa are especially well-positioned to further this project for three main reasons: (1) they have long acted against unjust systems (such as patriarchy, heterosexism, colonialism, and capitalism), (2) they organize around notions (such as relational personhoods, collective welfare, political mobilizing, coalition building, and reflective solidarity), that contrast those of colonialist, capitalist, and neoliberalist orthodoxies (such as individualization, isolation, personal ambition and advancement, competition, and dehumanization) and (3) they are not ‘the master’s tool’ so they may help ‘dismantle the master’s house’ (Lorde 1981). Among Maasai women of northern Tanzania, olkishoroto is one such example. Women mobilize this centuries-old form of collective action based on shared values of motherhood and morality to resist inequities. Historically, women used olkishoroto to sanction Maasai people who violated social expectations of enkanyit (respect); however, recently, women expanded the scope to challenge structural inequities such as forced land grabbing. Newer invocations of olkishoroto index its adaptability to actors, issues, and contexts. If any force is to stand toe-to-toe with colonialism, capitalism, and/or neoliberalism to challenge injustices born of these processes, we need an equally transnational process—like feminism without borders—that centers collaboration rather than individualism, communal-welfare rather than personal advancement, solidarity rather than isolation, coalition building rather than competition, and relationships rather than transactions. We can look to African women’s activisms—like olkishoroto—to help chart the course.