My March 2016 visit to Williams College gave me a lot to think about. In the course of preparing for a public lecture and guest-teaching a Comparative Literature class for one very full day on campus, I came upon this photo: 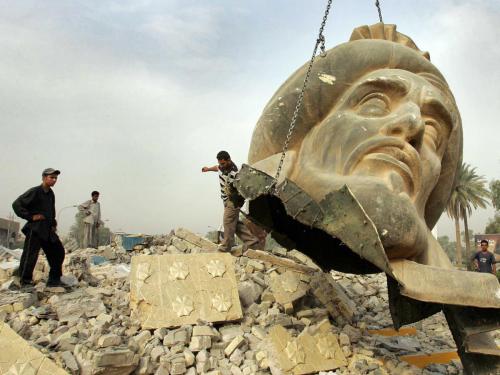 It documents the ruined statue of Caliph al-Mansur in Baghdad. Bombers strapped explosives to it and brought it down in 2005. I used the image to encourage discussion following my lecture, titled “The Arab Caliphate Remade: Writing Vizier Culture from Iran to the Red Sea.”

I also hoped the photo would instill in my audience an appreciation for medieval icons’ potency in modern nation states. People who plant bombs in Iraq, we’re often told by journalists and pundits, want to restore the Islamic caliphate of centuries past. That’s not really accurate. In many ways, medieval figureheads such as al-Mansur now spark resentment for their individual, perhaps tyrannical, hold on power. Alternately, their legacy is fought over among factions—the statue’s destruction seemed to say that the Baathist regime that had promoted itself through al-Mansur had no right to do so in the first place, and neither did the puppet politicians who arose in twenty-first century Iraq.

Al-Mansur is known as the builder of Baghdad, the one whose political talents allowed the city to become perhaps the greatest imperial capital of the Middle Ages. He was also a devoted patron of literature. In the tenth century CE, about two hundred years after his reign, a group of Iranian princes, generals, and viziers took over the administration of Iraq. They became not only the foremost patrons of court poets but also some of the most exacting, even aggressive writers of their own literature. In other words, they politically and culturally eclipsed the caliph, while keeping him in place as a useful symbol. One of the main arguments I made in my lecture was that viziers, as they gained political authority, experimented with language, pushing the boundaries of mainstream Arabic poetry and prose. The caliph’s recession as a patron during the late Middle Ages has been mourned by a good number of modern critics. I propose that such nostalgia is misplaced. What we now think of as Classical Arabic “high culture” is, subtly but tangibly, comes more directly out of the vizierate than from royal courts.

Much of my Williams presentation overlapped with research I conducted for my book manuscript, Medieval Empires and the Culture of Competition. It has been a pleasure to write, and cathartic to finish the manuscript then send it in for press consideration in 2015. Since that point, I’ve had the chance to write a new article, on a type of poetic dialogue called ijaza, which enjoyed popularity in al-Andalus. Ijaza is the tradition of exchanging lines of Arabic poetry. The courtly classes delighted in the ritual, seeing where a given topic might take improvising poets. Audiences also used ijaza to judge who was capable of the most brilliant verse, and therefore who deserved the richest rewards. One of my favorite ijaza examples is between a caliph (there’s that title again!) and two of his courtiers. They start throwing around ugly-beard jokes in their poetry, a beloved cliché in the medieval Mediterranean. Finally, the courtier who’s been catching the brunt of the nasty ijaza lines decides it’s time to retaliate. He may have an unkempt beard, he allows, but what about the other courtier?

Ibn Juhayr has recited the kind of poem that sounds like he’s chewing on a mouthful of nasty thistle and beans!

Why did he shift the topic from beards to barely palatable foods? Did he get tired of the ridicule, or was there something about thistle and beans that his audience would find especially funny? Did chewing on them together produce long-term ill effects? Or were these words just convenient for the sake of rhyme and meter? I’m working on the article that will put these questions to rest once and for all, so we can all breath a thistle-free sigh of relief once it’s published.