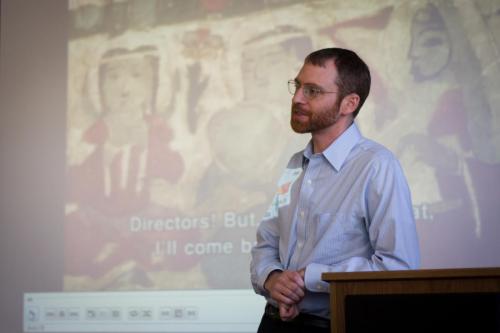 Entering the Ambrosiana in Milan, visitors have a choice: turn left for the art exhibitions, or right for the library. It was a tough decision when I first arrived. Traveling in the region to study Arabic manuscripts, I felt some temptation to veer off into the gallery where, I’d read in the museum brochure, I could admire dozens of sketches by Da Vinci and marvel at Caravaggio’s “Basket of Fruit.” (Everyone tells me the painting itself is far more exciting than its title.) Most of my archival research experience has been at Spain’s Biblioteca Nacional, which never fails to astound me with the volume of Arabic and Romance manuscripts it holds—but there’s something special about the Ambrosiana and its museum/library dual identity. It’s tucked right into the center of Milan yet manages to be hard to find and, whereas the Biblioteca Nacional’s reader services desk is the obvious hub of the building’s well-organized activity, at the Ambrosiana you’re left to wander a bit more. I never ended up going to the art gallery, but I like to think that the hushed reading room proved just as compelling as Renaissance and Baroque masterworks.

My stays at the Biblioteca Nacional and the Ambrosiana make up part of the legwork for my book in progress, Literary Competition in the Middle Ages. I’ve dedicated much of the past year to augmenting the original-source research upon which the book is based. Some of the more interesting phenomena to be found in the manuscripts I’m reading are the high-stakes poetic contests overseen by Iraqi viziers and the generations of elites succeeding them as the ‘Abbasid Empire in Baghdad crumbled, making way for such regimes as the Ayyubids, centered in Cairo. The project has taken me to several libraries in Europe and Egypt. While trying to deepen my engagement with Arabic manuscript tradition, I’ve been writing the latter two chapters, on medieval European portrayals of Arabs. Semi-fictional North African and Levantine knights became a staple of Romance texts, challenging their Christian European courtly peers over such matters as morality, religion, law, and history. I argue that European writers sought to understand and compartmentalize the failures of the Crusades by bringing Arabs into the contentious world of Christian chivalry.

The unique character of our department, with its focus on modern Africa’s languages and artistic cultures, means that my teaching goes in directions beyond my work on the Middle Ages. In 2014, I finished an article on modern North African authors’ uses of Classical Arabic prose. That article, “‘Blame these days, don’t blame me!’ Rewriting Medieval Arabic in Maghrebi National Literature and Drama” is currently in press at the Journal of Arabic Literature. Writing it gave me the chance to figure out exactly what critical territory in Moroccan and Tunisian fiction I saw as unexplored and requiring new analysis: in the twentieth century, writers shifted from using Classical to modern “standard” prose but then, subtly, back to the Classical. The work took me a long time but in the process I’ve learned how I might expand the historical scope of my reading and teaching.

While on the subject of unexplored territory, in the year to come I’d like to visit the Ambrosiana once more. This time, I’ll make sure to go see the pictures.