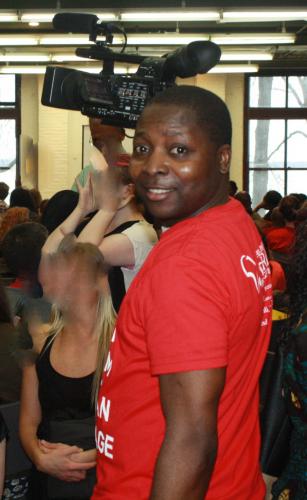 My dissertation project grew out of my interest in the Nigerian movie industry and was further developed in a class I took with Professor Aliko Songolo in the spring of 2010 on Francophone African cinema. The class introduced me to many francophone African filmmakers and publications about them. However, I was disappointed that no Nigerian filmmaker has a book written on him or her despite the long history of theater and cinema in Nigeria. My project aims to fill this gap by examining four of the best filmmakers in Nigeria. The central question of my doctoral research is why auteurist criticism has not been brought to bear on Nollywood films despite its impacts on African cinema and global film culture. Nollywood film tradition has engendered a thriving scholarship, with new books numerous scholarly articles published yearly, not to mention magazine reviews both within the African context and from global comparative perspectives. Yet, scholars have not made substantive attempts to document Nollywood directors as essential contributors to the African cinematic canon. In my dissertation, I study four Nollywood directors Abbey Lanre, Amaka Igwe, Kunle Afolayan, and Tunde Kelani, noting how their films refigure “trash” as a discourse which engenders “refined” cinematic aesthetics and styles different from mainstream Nollywood films. I aim to construct cinematic rubrics in tandem with global film practices to discuss films made by the four selected filmmakers alongside low-quality popular films made by mainstream Nollywood directors. Past scholarship focuses on peculiarities of Nollywood films without detailed appraisal of the filmmakers. I argue that doing so denies the agency of Nollywood filmmakers.