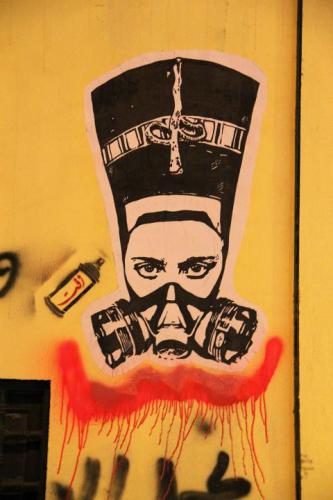 I am currently working on a book manuscript on women, art, and revolution. The book examines how women, in periods of political and social despair, contribute to the discourse on revolution through their creative production. They demonstrate their defiance of authoritarian regimes by breaking the rules of paternalism, destabilizing the common knowledge on women and challenging the overarching essentialist views on women’s conditions in the Arab World. Two different yet complementary expressions of defiance can be depicted in their works, and are of civic and epistemic nature: against the established order, on one hand, and against ways of perceiving, representing and understanding women in the revolution, on the other.

My intentions are to continue researching this relatively uncharted, compelling, and ever-evolving subject and to compile and present my findings in order to contribute to the on-going debates concerning Arab women’s place and their role in the public sphere and to demonstrate how their participation is challenging commonly held, outdated perceptions that persist in the Arab world and beyond. While the revolutionary upheaval unfolding in the region was a call for internal political and social change and a shift of the geopolitical alignment of the Arab world, it was also a determined contestation of globalized Western centrality (“the West as the measure of the Rest”), and coloniality alike, attesting to what Hamid Dabashi describes as the “restoration of a confidence in being-in-the-world” (The Arab Spring 17). Women in Egypt and Tunisia were increasingly able to see themselves as citizens of the world. More specifically and because we are at the threshold of a new world order that will require and produce a new organicity for the intellectual, I will look into the transformation of the place and the role the intellectual in society; from a ‘specific’, a ‘collective’, an ‘organic’, and an ‘exiled’ intellectual, to what I have deemed, a ‘transnational intellectual,’ who is no longer limited by postcolonial terms of engagement, and who is supported by globalized media: blogs, Twitter, Facebook, YouTube, etc.

Considering my findings, it is apparent that we are witnessing the birth of, what I am tempted to call, a “parallel revolution” unfolding underground and led by women. This revolution, fuelled by what Hamid Dabashi calls a “delayed defiance”, is gradually accelerating the transition of the Arab world toward democracy and social justice through new imaginative vectors that are being cultivated in literary and artistic forms. It is important to note the duality of the struggle. In defying the predominant patriarchal and essentialist images of Arab women, they are also contesting manufactured Western views. Such conflicting statements ignored, and in some ways, seemed to be intent on eradicating the importance and impact of the long history of Arab women’s defiance and protest, most recently in the decade prior to the 2011 revolution. Their demands were for justice and freedom for all citizens, rather than being solely focused on women’s liberation and equal rights. In the spring of 2011, thousands of women were on the front lines of movements in North Africa that toppled leaders in Tunisia and Egypt. These women played a catalytic role in organizing protests, informing the international media, and nursing the sick and those injured in the protests. Other women engaged in artistic expression to counter and challenge the monolithic and conformist leaders in power. In trying to find means to access the public sphere through various modes of communication and creative expression, while resisting being labeled as feminists or identified as “only women,” they utilized established media, improvised, and invented new forums that allowed them to be heard and to be recognized as citizens struggling for their right to freedom, dignity, and social justice.