I am currently working on a book about the history of motion pictures in Nigeria, with particular emphasis on the social, political, and economic forces that contributed to the emergence of Nollywood and some of its aesthetic practices. During the summer of 2015, I made a short trip to Nigeria to collect a variety of resources, including newspapers and government documents from the National Archives, newspaper clippings from the Nigerian Institute for International Affairs, and interviews with motion picture experts. The key chapters I am currently writing cover the late colonial and early postcolonial eras. For these chapters, I am depending on a wide variety of archival materials such as: 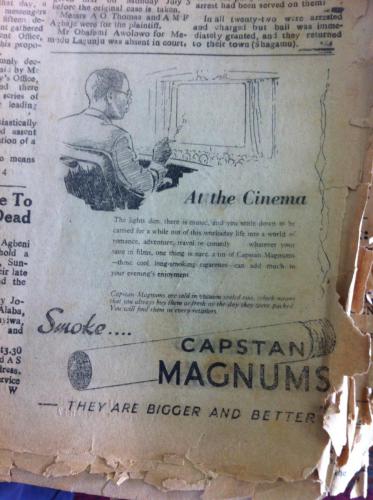 The newspaper advertisement pictured to the right came from my research in the Nigerian National Archives in Ibadan.

This year I also completed an article for a special issue of the journal Black Camera on the marginality of African screen media studies. I argue that the ways in which producers of film and television in Africa have historically addressed their audiences are so different from the forms of address that prevail in Euro-America that mainstream film studies concepts are inadequate for understanding them. Scholars of African screen media must therefore produce new methods of analysis that will not only better represent the phenomena we study, but potentially expand the scope and capacity of film and media studies generally.

Another major project that I completed this year was the hosting of an international symposium on reading texts produced in the informal markets of the Global South. With my colleague Victor Goldgel-Carballo (Spanish and Portuguese), we brought together twelve scholars of popular literature, magazines, film, media piracy, festivals, visual art, and more for a two-day intensive discussion on the implications of markets and patterns of circulation for various reading practices. Title “Forms of Informality: Textual Analysis and Popular Culture in the Global South,” the symposium was a remarkable success. Victor and I plan to publish the group’s research in the near future.

Photo by Matthew H. Brown: An advertisement for cigarettes that appeared in the Southern Nigeria Defender on July 3, 1948.