Our faculty are research specialists in African languages, and the literatures and cultures expressed in those languages. Our students train in literary studies, critical applied linguistics, and cultural studies. Below are examples of what we’ve been working on during the most recently completed academic year. Find past reports here. 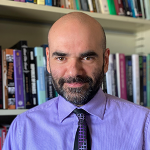 Vlad Dima’s third book, Meaning-Less-Ness in Postcolonial Cinema, is under contract with the Michigan State University Press (forthcoming fall 2022). This is a study of meaning and meaninglessness through the figure of the undead beginning with francophone sub-Saharan Africa and extending to postcolonial France. The project has three goals: first, to show that the sub-Saharan cinematic image may produce meaning without any attachment to time; second, to argue that meaning is connected instead to the philosophy of negritude, to the notion of rhythm, and to representations of the undead; third, to introduce a new term, the rhythm-sequence, which may accurately measure how meaning, negritude, and the undead all connect with the African moving image. Vlad’s second book, The Beautiful Skin: Football, Fantasy, and Cinematic Bodies in African Film, came out in September 2020, also from the Michigan State University Press in September 2020.

Luís Madureira published two book chapters this year, including “The ‘cannibal cogito’ and Brazilian antropofagia: radical heterogeneity or ‘family resemblance’?” in The Routledge Hispanic Studies Companion to Colonial Latin America and the Caribbean (1492-1898) and “Lusophone Southern African Literature (Angola and Mozambique)” in A Companion to African Literature. He also had several things accepted for publication that should be out next year, including his translation of The Correspondence of Afonso I Mvemba a Nzinga, King of Kongo, under contract with Hackett Publication Company, “A Long Walk in the Great Night: The Global South, Resistance, and the Anthropocene,” which will appear in The Routledge Companion to Twentieth and Twenty-First Century Latin American Literary and Cultural Forms, and “Peer Review: Overview and Current Issues,” which will appear in the MLA Guide to Scholarly Communication. 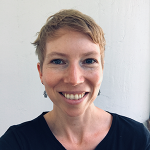 Department Chair Katrina Daly Thompson had her two-year Vilas Associates Award extended for a third year because of COVID and used it to continue work on her book project, a multi-sited ethnography of nonconformist Muslims. In Summer 2020, she used her Summer Stipend from the National Endowment for the Humanities to write a book proposal. She also published two articles from this project, “Making Space for Embodied Voices, Diverse Bodies, and Multiple Genders in Nonconformist Friday Prayers: A Queer Feminist Ethnography of Progressive Muslims’ Performative Inter-Corporeality in North American Congregations” in American Anthropologist, and “Queering Language Socialization: Fostering Inclusive Muslim Interpretations through Talk-in-Interaction” in Language & Communication. Her book based on this work, tentatively titled Misfits, Rebels, and Queers: An Ethnography of Muslims on the Margins, is now under contract with NYU Press, to be published in its North American Religions series. Thompson also published “Fictive Fathers in the Field” in the Journal of Autoethnography. In October 2020, Thompson became Editor in Chief (with Neni Panourgia) of Anthropology and Humanism. In May 2021 she gave a keynote in Swahili for CHAUKIDU (Chama cha Ukuzaji wa Kiswahili Duniani, i.e. the Organization for the Global Growth of Swahili) about her use of linguistic anthropological research in developing open-access Swahili instructional materials.